Claudius Abesodo Gamiel Winston King Pratt aka Gamiel Stone hails from New York City. His first recording was made in an apartment on the NYC’s Lower East Side, with Huey Morgan of Fun Lovin’ Criminals and Ray Greene legendary NYCHC drummer. The drums were set in the living room the guitars in the kitchen and the vocals in the toilet. At that time he was part of a New York underground scene crossing paths with Elliot Sharp, Tony Scherr, John Lurie, Screaming Headless Torsos, Mike Doughty, ABSOLUTION, Murphys Law, Cro-Mags, Joey Rammone and many of the diverse talents of the New York city scene.

His whole life has been spent traveling the world and playing his music, from Africa to Anatolia. Playing venues such as the Knitting Factory and the legendary CBGB’S in New York to Copenhagen Jazz House and the Paradiso in Holland. This tireless minstrel has taken on many projects under many monikers. His Last Project REVEREND SHINE SNAKE OIL Co. is what has lead him to this current production. HODJA has given rise to yet another personality whose mischievous appetite conjures up moods reminiscent of “The Velvet Underground” & “The Sorrows”.

Matthias Arbo Klein has been drumming in over 20 years. He learned by listening and playing to everything that caught his attention. His biggest influence was his teacher Mr. Jerry Granelli, drummer with The Grateful Dead, Charlie Haiden and Ornette Coleman. Matthias had the great fortune to study under him at the University of Art in Berlin from 2001-2005. Moving to Copenhagen/Denmark in 2006 he became the drummer of Reverend Shine Snake Oil Co. He has since gone on to play with several other groups also creating his own solo project “F.W.Smolls”. He has been describes like this

“One of the bright lights on the music scene appears to be a multiple-personality expression of the artist formerly known as Matthias Arbo Klein. Maybe you’ve seen and heard Colonel Taz behind his drum kit, decked out in a tight black retro-suit, laying down some wicked tom-tom boogie rhythms behind the awesome soap-box musical theatre act known as Reverend Shine Snake Oil Co… Or maybe you’ve wondered, “Who is this F.W. Smolls, anyway, that bearded wildman in skinny jeans, stepping into the spotlight on stage at Mojo Blues Bar, telling stories of unrequited love and lust, and singing the lament that lingers at the heart of Monday night?” … “Whatever the case, and whichever of these personalities you may or may not have witnessed, you will notice that this man takes a special joy in entertaining with his prolific songwriting, unpredictable and innovative reinterpretations of the songs he covers, and with a stage presence that conjures up an image of a reincarnated vaudevillian.”

Boi Holm, or Tenboi Levinson is a musician, composer and producer from Copenhagen, Denmark, who has been playing guitar since the late 70’s. Funk, punk, jazz, new wave, blues, rock n’roll, whatever… A self-taught multi-instrumentalist, he works as a producer/musician with Danish artists Caroline Henderson, Steen Jorgensen and Jimmy Jorgensen. He composes for feature movies, TV-series, documentaries, installations, exhibitions and his trios – Hodja, Kamen Rider and Tenboi Trio (improvising free-jazz bands).

“The trios are my musical and spiritual escape way from the tight and scheduled arrangements I usually work with.”

Boi met Claudius and Matthias when producing an album with Reverend Shine Snake Oil Co., He later hired and toured with the drummer Matthias where they found common pleasure and ease in playing together. One night while hanging out at his personal studio in Christiania “Chimney Top Roof Recording” Boi and Claudius wrote some sketches to that would later turn into songs for their first collaboration and “HODJA” the band was born. 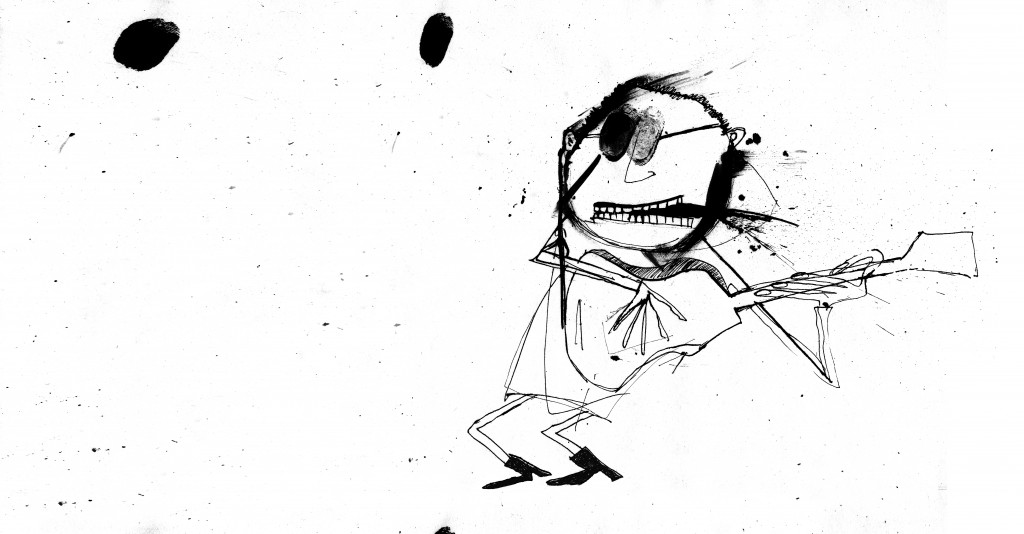