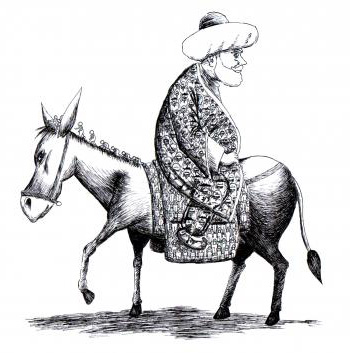 Some children saw Hodja coming from the vineyard with two basketfuls of grapes loaded on his donkey. They gathered around him and asked him to give them a taste.
Hodja picked up a bunch of grapes and gave each child a grape.
“You have so much, but you gave us so little,” the children whined.
“There is no difference whether you have a basketful or a small piece. They all taste the same,” Hodja answered, and continued on his way.

Hodja was walking in the bazaar with a large group of followers. Whatever Hodja did, his followers immediately copied. Every few steps Hodja would stop and shake his hands in the air, touch his feet and jump up yelling “Hu Hu Hu!”. So his followers would also stop and do exactly the same thing.
One of the merchants, who knew Hodja, quietly asked him: “What are you doing my old friend? Why are these people imitating you?”
“I have become a Sufi Sheikh,” replied Hodja. “These are my Murids (spiritual seekers); I am helping them reach enlightenment!”
“How do you know when they reach enlightenment?”
“That’s the easy part! Every morning I count them. The ones who have left – have reached enlightenment!”

Hodja was boasting about the power of his faith.
“If your faith is so strong, then pray for that mountain to come to you,” said a skeptic, pointing to a mountain in the distance.
Hodja prayed fervently, but the mountain did not move. He prayed more, but the mountain remained unmoved.
Finally Hodja got up from his knees and began walking toward the mountain. “I am a humble man,” he said, “and the faith of Islam is a practical one. If the mountain will not come to Hodja, then Hodja will go to the mountain.”